What do casement windows and an 800-year-old castle have in common?

This year’s Riba Stirling Prize for architecture has been won by a holiday home inserted into the walls of an ancient castle.

Astley Castle beat five other nominations for the award, which is presented by the Royal Institute of British Architects, and is considered one of its highest accolades. The president of Riba, Stephen Hodder, called it a ‘real labour of love’. He went on to add: “Astley Castle is an exceptional example of how modern architecture can revive an ancient monument”.

The house, located in Warwickshire, beat off competition from the Giant’s Causeway Visitor Centre, and Park Hill, a renovated 1960s estate in Sheffield. 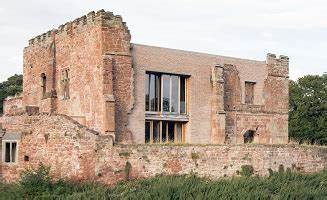 Astley Castle was once home to the Grey family and has links to three queens of England. It attained a grade II listed building status in 1951, however a fire in 1978 had gutted much of the original building. The listed status meant much of the original structure could not be touched. That meant that the architects had to build the contemporary part of the building intertwined with the existing structure. They have really brought the building back to life in a sensitive way, and itmeans that many more people can enjoy it for years to come.

The new building is a lovely holiday home restored by The Landmark Trust, complete with modern casement windows and stonework that closely matches the original. The three remaining walls of the castle have been incorporated into the design and the huge original fireplace remains.

It really is an extraordinary building and fully deserving of its victory. Hopefully it will inspire others to restore and renovate rather than doing away with the features that make period properties so special.

Very often working with what is there and combining old and new features can create something that is both unique and utterly charming. That’s why the listed buildings project was started and why it is important to maintain our architectural heritage and period features if and where we can.