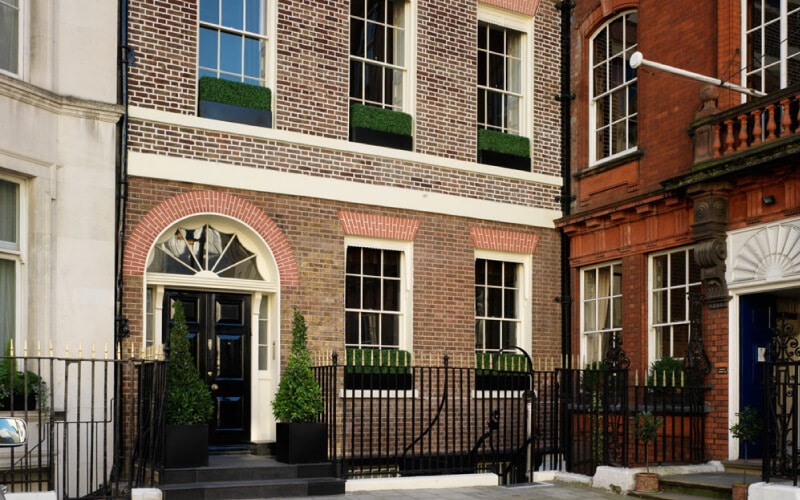 Many developers of period properties in the present day are keen to retain as many original features as possible. As well as ensuring that they hit the brief when it comes to the sympathetic renovation of a historic home, this means that they can successfully mix in the new while playing homage to the old.

The above is as true for Georgian properties as it is for any other properties from eras gone by, and contemporary takes on Georgian homes are likely to boast features such as Georgian front doors.

Here are some of the latest Georgian, contemporary developments where sash windows and more are still making their mark.

Originally built in 1836, these Grade II listed homes have been transformed into an opulent version of their former selves, whilst still staying true to their 19th Century roots. Alongside their original sash windows, this also includes red brick chimney pieces, ornate fireplaces and intricate cornicing.

On the redevelopment, Gal Adir, said:

“We wanted to break all the conceptions about Georgian houses being creaky and draughty places to live. We wanted to restore the building to its original use and proportions without compromising on comfort.”

Recently hitting the headlines for what could arguably be one of the expensive properties to rent in London, Audley House is a sight to behold.

While the six-storey Georgian mansion has gained modern additions such as its own gymnasium and wine cellar, it boasts many features from its architectural past including sash windows.

The corner mansion also has a number of other ‘wow’ features to tempt prospective, and no doubt wealthy, tenants including four reception rooms, five VIP bedroom suites, a family kitchen and a private walled garden.

According to reports in The Daily Mail former Prime Minister Tony Blair and his wife Cherie are said to have called in the valuers to assess the value of their charming Georgian townhouse in Bayswater.

The property boasts five bedrooms, four bathrooms and three reception rooms, and naturally traditional sash windows, and it has also been extended thanks to the purchase of the mews house behind it.