Have you seen our advert at Sunningdale train station?

Sunningdale railway station is served by trains running between London Waterloo and Reading. If you are traveling to or from Sunningdale train station, or passing through the station by train, look out for our advert which will be at the Sunningdale station until the 20th October.

The village of Sunningdale was originally part of Old Windsor, before becoming a village in its own right in 1894. Until 1995 the village was also split between two different counties, Berkshire and Surrey.

Today the whole of Sunningdale is located within Berkshire, within the Royal Borough of Windsor and Maidenhead.

The village is home to several large period houses and mansions. One such property is Coworth Park Hotel, an 18th Century country house with timber sash windows.

The original property was built in 1776 for William Shepheard, a prosperous East Indian merchant, and was previously known as Coworth House. The future Edward VII and Queen Alexandra stayed at Coworth Park in 1879 and 1883 when they attended the races at nearby Ascot.

The property remained a private home, passing through the hands of several Lords and Ladies, until 1957. It was then converted to use as a Roman Catholic convent school, before being converted into offices by Harold Bamberg.

In the mid-1980s Galen Weston, the owner of Selfridges and Fortnum and Mason, purchased the estate and built its first polo field.

Coworth Park was brought by Dorchester Collection in 2001. In 2008 work was carried out on the Georgian manor house to transform it into a luxury hotel resort, and the hotel was reopened in September 2010. Today the building is the only hotel in the UK that has its own polo grounds.

The Sash Window Workshop in Berkshire

With our office and workshop located in nearby Bracknell, The Sash Window Workshop has replaced and repaired timber windows and doors for several customers in Sunningdale.

All our replacement timber windows and doors are bespoke and manufactured in our Berkshire workshop by our expert craftsmen using the latest technology.

We are proud to provide our customers with a high quality product, alongside excellent customer service, reflected by the fact that over half of our orders come from existing customers or recommendations. 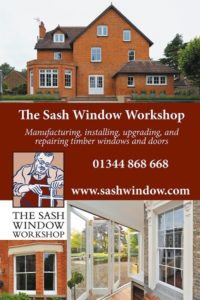