When we think of Georgian architecture, we think of understated elegance achieved through simplicity, symmetry and proportion.

The term Georgian originates from the four British kings who reigned between 1714 and 1830 – George I, George II, George III and George IV. Technically, Georgian is not a style but an era – the period within which we saw the development of architecture and interior design from a number of key designers including Chippendale, Adams, and Hepplewhite.

This was the time that young, British aristocrats (some of whom were architects and furniture makers) would take a Grand Tour of European cities, experiencing the opulence and ornate detail of classical Baroque architecture. Understandably, many were influenced by what they saw, though in a far more restrained fashion – paring down grand, flouncy designs into simple motifs.

Whilst Georgian architecture was ever prominent during the 18th Century, it still remains popular today with an increasing number of homeowners opting for the styles and traditions of the Georgian era.

The type of building that was characterised by the Georgian period was town houses and often end-terraces. This was due to the 18th Century being a time of great urban growth and settlement within British towns. Due to this there was a need to be able to fit more and more people into one household – hence the birth of the town house.

It is important to note that there was two styles within the Georgian era – that of the early Georgian and late Georgian period.

The Early Georgian period saw a revival of Palladianism, (named after Italian architect Andreas Palladio) and a penchant for Roman temple facades and pillars. The proportion and layout of buildings was calculated down to the very last detail; Early Georgian houses had simple flat frontages with windows and doors set back at least four inches from the brick face (often with a simple semi-circular fanlight above).

The Late Georgian period saw more flexibility with the rise of Regency style – more ornamentation and ‘showiness’ with grander entrances (often with steps up to the front door), decorative iron railings, larger windows, balconies and French windows and even conservatories.

Houses were built in long, uniform terraces – most often in straight lines but also around a square, or forming a crescent around a green space. This uniformity owes much to the London Building Act of 1774 (known as The Black Act), passed in response to the Great Fire. The act imposed many rules and restrictions for house building, including that houses should be brick, windows recessed and that roofs should be slate and must not overhang.

The classic Georgian timber door consisted of a simple one or two story box shape with two smaller top panels, and occasionally glass panes at the top. Many had a filigree fanlight and a canopy overhanging.

Colour Schemes
At the time of construction of Georgian homes, paints came in a limited range of colours due to the industrial processes needed to produce them. Initially the early Georgian interiors were focused around burgundy and sage green, but middle and later period styles became lighter and played more on the advantage of the natural light that flooded in through the window arrangements.

Soft blues, greys, dusky pinks and white are all sympathetic choices and modern ranges from major paint manufacturers often include special historical period colours so you can get the Georgian look just right.

Although we don’t know for sure where and when the sash window first appeared, it was the Georgian era that saw timber sash windows become the fashionable choice for the discerning homeowner.

The single hung sash window was the most obvious choice, a design that consists of two sashes, one of which moves. There aren’t too many examples of these still remaining as towards the end of the period, the design trends favoured the double hung sash windows, where both parts of the window move.

An important factor about the design of Georgian Houses was the Window Tax – a property tax based on the number of windows in a house. In England and Wales, the Window Tax was introduced in 1696 and was repealed in 1851.

Many Georgian houses have small six-paned sash windows and/or dormer windows in upper floors (typically used for servant’s quarters) and then larger windows (with nine or twelve panes) on other floors.

Curtains were a major feature, with delicate patterns often based on floral designs that would match those of the furniture coverings.

Floors were bare floorboards predominately made from pine and fir, and ornamental rugs and patterned coverings were also used to decorate floor spaces. This fits in well with the contemporary trend for wooden flooring as opposed to deep pile carpet.

Following on the heels of the Georgian period, came the Victorian period. 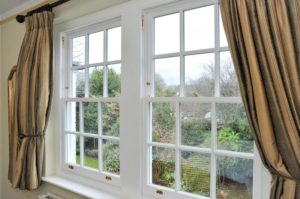 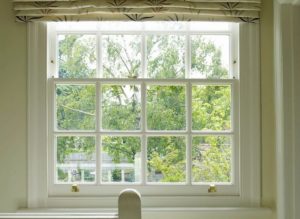 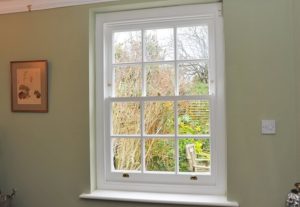