Christmas with the Victorians 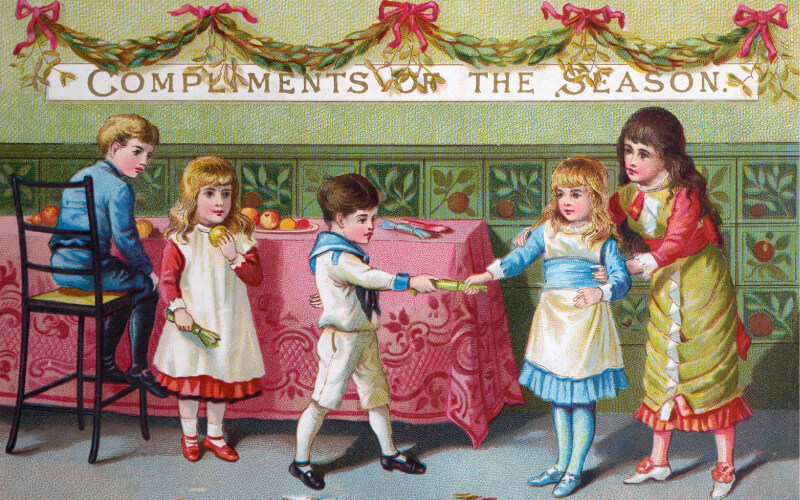 At the beginning of the 19th Century Christmas was celebrated very differently with many businesses not considering it as a holiday. However, over a very short time period Christmas developed into something similar to what we would recognise today.

The new Victorian Christmas festivities were focused on the home, family and indulging children. Several items now associated with Christmas were introduced during the Victorian period. These included Christmas cards, crackers, eating turkey, having a Christmas tree and Santa Claus.

Decorating the home for Christmas became more elaborate during the Victorian period. Medieval traditions of bringing greenery into the home continued. However, placement of these decorations became important with uniformity, order and elegance being encouraged.

The popularity of the Christmas tree is often attributed to Queen Victoria’s marriage to Prince Albert. In 1848 a drawing of the royal family celebrating around a decorated Christmas tree was published in the Illustrated London News and shortly after every home in Britain had a tree decorated with candles, food, decorations and small gifts.

Roast turkey also became associated with Christmas during the Victorian era. At the start of Queen Victoria’s reign beef and goose were often the centrepiece for the Christmas dinner. However, by the end of the 1800s turkey became more popular with the upper classes. It wasn’t long before turkey was also the dominant Christmas meat for middle class families.

Early Victorian recipes show that mince pies were initially made from meat, a tradition dating back to Tudor times. However, during the 19th Century mince pies without meat began to gain popularity within the upper classes and evolved into the mince pies we know today.

Previously gifts had traditionally been given for the New Year. However, with the growing importance of Christmas, gift giving moved earlier to align with Christmas. Gifts were initially modest, with most gifts being fruit, nuts and sweets which were hung on the Christmas tree. However, by the end of the Victorian period upper class and middle class children would often be given larger toys, such as dolls or games which, due to their size, would be placed under the Christmas tree.

Santa Claus originated from 17th Century stories of St. Nicholas. In Holland, where the story originated, he was known as Sinter Klass. He became known as Santa Claus in Britain in the 1870s. 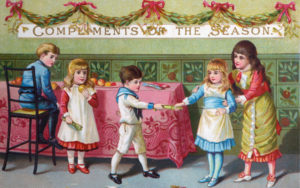 Henry Cole created the first Christmas card in 1843. He commissioned the artist J.C. Horsley to design a festive scene to use on his new seasonal greeting cards to sell to the public. At one shilling each they were too expensive for ordinary Victorians. However, the idea caught on and many children were encouraged to make their own. With the improvement in printing technology during the Victorian era, prices dropped and by 1880 over 11 million Christmas cards were being printed to send to friends and loved ones.

The Christmas cracker was introduced in the 1840s after a British confectioner, Tom Smith, was inspired to invent a new way to sell sweets during his trip to Paris. He came up with an idea to create a package that snapped when it was pulled apart to reveal sweets inside. In the 1860s this evolved so the crackers would create a ‘bang’ on being snapped and later in the Victorian period sweets were replaced by paper hats, a joke and small gifts.

Charles Dicken’s book A Christmas Carol is often credited with helping to spread and popularise the traditions now associated with Christmas, with the importance of family and celebrating Christmas at home growing during the period.

The Victorian period saw the introduction of the holiday season for the middle class, allowing them to take Christmas day and boxing day off work to spend with family. People would often spend the day visiting relatives and friends or attending church services.

Entertainment for a Victorian Christmas celebration often consisted of family members or friends reciting poems, reading stories, singing or playing an instrument, with children practising for weeks in preparation. Games, such as charades, were also played during the day.