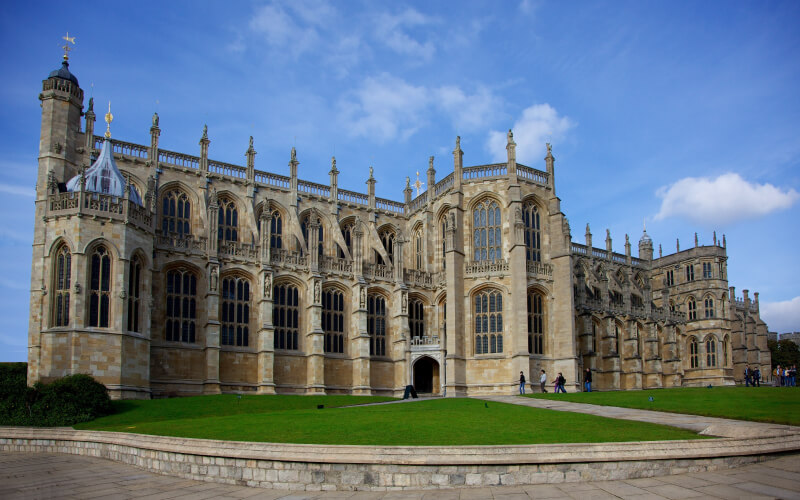 With the royal wedding of Prince Harry and Meghan Markle just days away, the eyes of the world will soon be on St George’s Chapel in Windsor, Berkshire.

The college, where the chapel is located, was founded on the 6th August 1348 by King Edward III and has a rich, royal history. St George’s College was founded in relation to the Chapel of St Edward the Confessor and was set up with a Dean and twelve secular priests (canons). The Chapel, constructed by Henry III in the early 13th Century, had a radical overhaul to be used by the College and the Order of the Garter. In around 1350, Edward III gave the Cross of Gneth to St George’s College, where it became a famous relic. 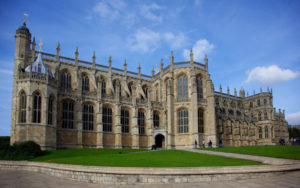 In 1475, multiple building work was carried out on the College, including the building of a new Chapel commissioned by Edward IV. The Chantry Chapels were later adapted by Henry VIII who added an oriel window for the use of his first wife, Catherine of Aragon, at Garter ceremonies.

The West window dates from the early 1500s and is the fourth largest window in Britain, containing seventy-five figures of popes, kings, princes and saints. In the 1840s, Thomas Willement restored and rearranged the historic glass of the West Window, providing six additional figures of his own design. The window was then restored again in 1929.

St George’s College was amongst the most important and prestigious in medieval England. Multiple Kings and Queens of England have been buried in the college, including Edward IV and his wife Elizabeth Woodville, Henry VI, Henry VIII and his wife Queen Jane, King Charles I and King George VI.

Between 1547 and 1548, under Edward VI’s reign, stone altars were removed from the Chapel. However, unlike elsewhere, the chantries were not abolished.

In 1642 during the Civil War, Windsor Castle became a Parliamentary stronghold and the Dean and Canons were removed from the College. The College was later restored in the 1700s by Henry Emlyn, on the order of Charles II.

Additional major restoration work was then carried out by George Gilbert Scott in the late 1800s and the Albert Memorial Chapel was created within the former Lady Chapel.

St George’s School, which was originally established in the 1300s to provide choirboys for the Choir of St George’s Chapel, moved to its present location of Travers College, once the home of the Naval Knights of Windsor, in 1893.

Sir Harold Brakspear undertook further major restoration work to secure the future of the Chapel buildings between 1920 and 1930. When World War II broke out many of the stained glass windows were removed and stored in the Curfew Tower to prevent damage.

More recently, further major restoration work started at St George’s Chapel, and the associated buildings, in 2004 and a service was attended by The Queen and Prince Philip in 2008 to recognise the efforts of those who contributed to the first phase of restoration works.

On the 19th May 2018, Prince Harry and Meghan Markle will exchange vows at the historic Chapel adding to the rich history of St George’s College, Windsor.