The History of Number 10 Downing Street 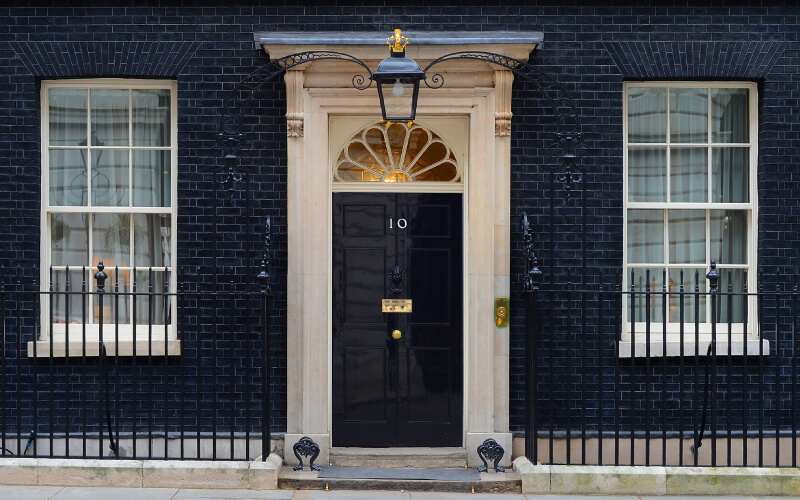 The first building on the site of Number 10 dates from the Middle Ages – a brewery owned by the Abbey of Abingdon; this had fallen into disuse by the early 16th century.

The first house known to have been built on the site was leased (by Queen Elizabeth I) to Sir Thomas Knyvet in 1581. Knyvet is most well-known for his role in the arrest of Guy Fawkes and the discovery of the Gunpowder plot in 1605. When he and his wife died the building passed to their niece, Elizabeth Hampden, and became known as Hampden House.

Later the building came into the possession of George Downing – a notorious spy for Oliver Cromwell and later Charles II. He is responsible for the street, its name, and for the buildings we know today.
Between 1682 and 1684, Downing employed Sir Christopher Wren to design houses for the site and so came the cul-de-sac of terraced townhouses.

Although these homes were large and looked impressive, they were built quickly and cheaply on soft soil with shallow foundations. Winston Churchill wrote that Number 10 was ‘shaky and lightly built by the profiteering contractor whose name they bear.’ 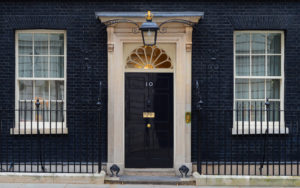 On the 14th October 1940, a huge bomb fell near Downing Street, damaging the kitchen and staterooms at Number 10. By the 1950s, the material state of 10 Downing Street had reached crisis point. Existing structural problems had been exacerbated by the bomb damage and the building was suffering from a variety of problems. Various committees, surveys and reports bounced from one incoming Prime Minister to another until, under the auspices of Harold Macmillan, it was finally decided that Number 12 should be rebuilt and that Numbers 10 and 11 should be strengthened and their historic features preserved.

Number 10 was completely gutted; walls and floors proved to be rotten and had to be replaced, whilst new features were added. It was discovered that the famous black exterior facade was in fact not black but yellow bricks, which had been coloured by centuries of pollution. The yellow bricks were duly cleaned and painted black to maintain the iconic appearance.

Additional work has been completed over the years, including repairs to damage caused by IRA attack in 1991. One of the items replaced after the nearby IRA attack was the black oak front door, which was replaced with a high security door.

The black Georgian and unnaturally shiny front door, which is the only way in and out of the prime minister’s home, is made of bomb proof metal.

The original front door was thought to be Robert Walpole’s door from 1735. The new door is an identical-looking high security door with solid letterbox. The door has not always been black, during the early 20th Century it was painted green.

To find out more information, or to obtain a free no obligation quote, please contact our team of experts on: 01344 868668.