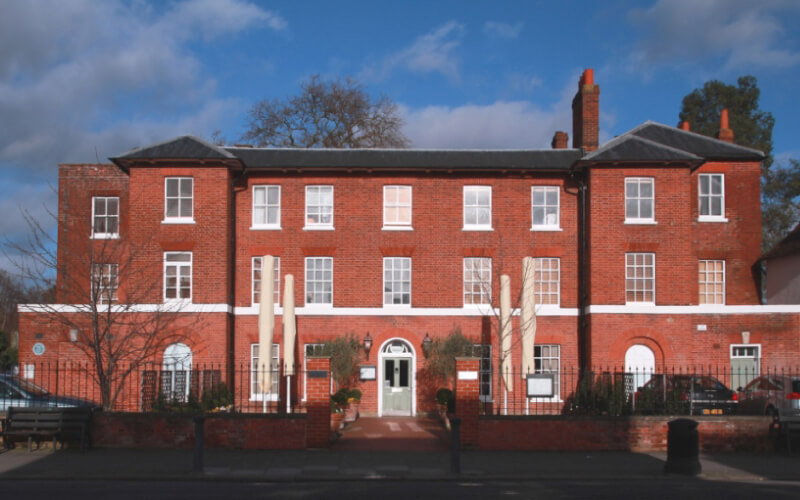 Wokingham means ‘Wocca’s people’s home’ and the town dates back to the Saxon times, when the town was a Saxon settlement occupied by the followers of a man called Wocca. Wocca also owned lands at Wokefield and Woking.

Wokingham became known for its bell foundry in the 1300s and many local churches ring out on Wokingham Bells. The bell foundry itself was originally located in the centre of Wokingham, but, by the late 16th Century, it had relocated to Reading.

During the Tudor period, Wokingham was also well known as a producer of silk. Some houses involved in the silk industry can still be seen in Rose Street. The silk industry dominated Wokingham until the early 19th century, when trade declined due to cheap French imports.

The Civil War was caused severe damage to the town, with Wokingham being regularly raided by both sides. These raids involved looting livestock and trading goods and nearly 20% of buildings in the town at the time were burnt down. It was not until the early 18th Century that Wokingham fully recovered.

The town was also famous for bull-baiting. In 1661 George Staverton left a bequest in his will for two bulls to be tethered in the Market Place and baited by dogs on the 21st December each year. The bulls were paraded around the town before the event. Once the bulls have been killed, the meat and leather were distributed amongst the poor people of the town. The cruel ‘sport’ was stopped in 1821, but meat was still distributed to the poor for many years after.

After the decline of the silk industry, the town became known for a wider variety of industries, including leatherworking, wool-dealing, brick-making, brewing and coach-building. One company, The Lush Brothers of Wokingham, even made coaches for King Edward VII, Prince Christian of Schleswig-Holstein and Empress Eugenie of the French. 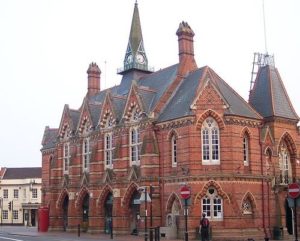 The current town hall was designed by Poulton and Woodman as part of a competition to design a building to replace the Guidhall, currently on the site, which had been built in 1612 and had become run-down. The Victorian, Gothic designed town hall was opened in 1860 by Richard Neville, the fourth Lord Braybrooke.

The building, which is now Grade II* listed, was originally used as a police station, before being used as a Guidhall, a fire station and now for Town Council administration. 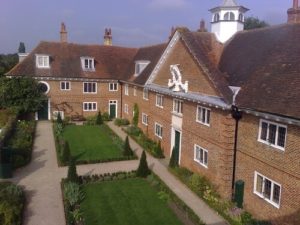 Lucas Hospital was founded by the estate of Henry Lucas. The almshouses were built between 1663 and 1667 and are named after their benefactor.

The windows in the main building are all wooden casement windows with leaded glazing, with arched windows on the front of the side wings and circular windows above the side wing’s entrance doors.

It has been suggested that Sir Christopher Wren may have been the architect of this building. However, no direct documentary evidence has yet been discovered to directly link Wren’s name with the design or construction.

The building, which has been privately owned since 2001, is Grade I listed and has a blue plaque. 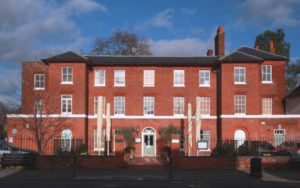 Throughout the 17th Century, father and son, both named Henry Mountague, ran a grammar school in Broad Street, almost certainly on the site now occupied by Montague House. A girl’s boarding school was later established in the 1770s and run from Montague House.

The Grade II* listed manor house has been extended and altered throughout its history. The building has multiple sash windows and has recently been sympathetically converted into serviced apartments, after being sold by Bracknell and Wokingham college due to problems in providing disabled access.

The late 17th Century mansion was previously used as the town library and part of South East Berkshire College from 1962.

Today, Wokingham has become one of the nation’s favourite places to live (source). There are still many historic buildings in Wokingham dating back to medieval times. In Rose Street, a series of medieval ‘Wealden’ (Sussex-style) hall houses can be found, some of which date back to the late 14th Century.

As Wokingham has continued to develop and expand, both sash windows and casement windows can be found on a variety period homes, and on more modern developments, throughout Wokingham.

If your timber windows or external doors need replacing, contact The Sash Window Workshop for a free, no obligation quotation on: 01344 868 668.