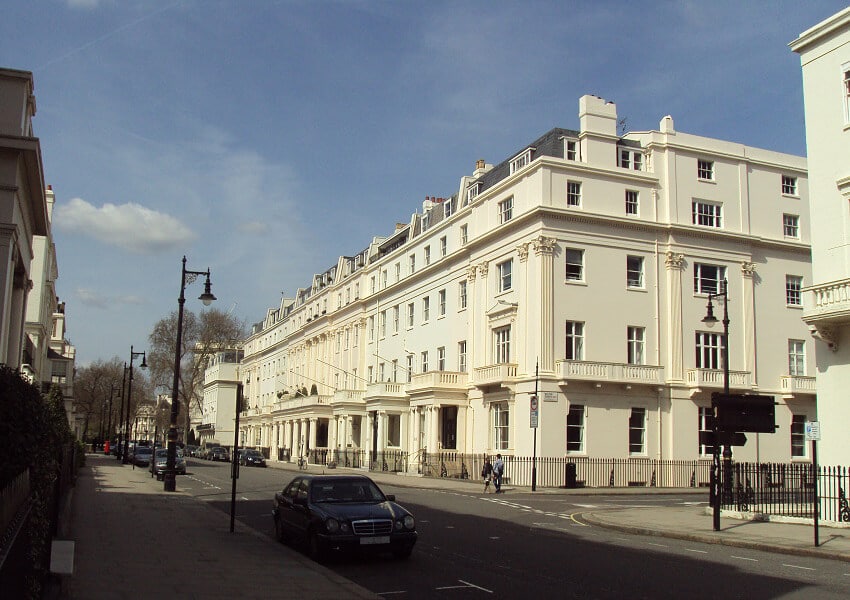 Located across both the City of Westminster and the Royal Borough of Kensington and Chelsea, Belgravia is one of the most affluent areas in the UK.

The majority of the area is located in a large conservation area, helping to preserve the heritage and architectural beauty of the area.

In the Middle Ages the area today known as Belgravia was known as the Five Fields, after the local fields which were used for grazing. The area was also home to various market gardens in the daytime.

However, during the night the area was known for its crime and violence. The area was home to the “Bloody Bridge” named after the gruesome murders that occurred there. It was also a popular spot for robbers and highwaymen.

The area became known as Belgravia in the early 1800s, when it was named after one of the Duke of Westminster’s secondary titles, Viscount Belgrave. In turn the title of Viscount Belgrave is derived from the village of Belgrave in Cheshire, which is built on land belonging to the Duke.

The area quickly became a popular place to live after George III constructed a row of houses on what is now known as Grosvenor Place.

In the 1820s Richard Grosvenor, 2nd Marquess of Westminster, asked Thomas Cubitt, a property contractor, to design an estate. The majority of Belgravia was constructed by the middle of the 1800s.

Belgravia was then, and to this day still is, an extremely fashionable and prestigious place to live. However, today many of the historic homes in Belgravia have since been converted to hotels. The majority of International Embassies and High Commissions are also located in Belgravia, making it a popular location for wealthy foreigners.

As a result of its popularity, Belgravia is consistently in the top five most expensive areas of London.

Belgravia is known for its grand terraces of white stucco houses with timber sash windows. Some of the most popular garden squares in Belgravia are Eaton Square, Wilton Crescent, Belgrave Square, Chester and Lowndes Square.

One of the largest and grandest squares in Belgravia is Belgrave Square. It was part of the estate worked on by Thomas Cubitt, who employed the architect George Basevi to design the houses. Many of the houses were built and occupied by 1840.

The square has four terraces, each with eleven white stuccoed houses, apart from the south-east terrace, which had twelve. There are also detached mansions in three of the corners.

All the buildings in the square are listed, ensuring that the heritage of the square is preserved.

Eaton Square was also built by the Grosvenor family, but unlike Belgrave Square, Eaton Square is actually a rectangular shape. The square was built between 1826 and 1855 and the changes in architecture over these 30 years are reflected in the buildings in the square.

Eaton Square is one of the largest in London and is divided into six compartments, separated by roads that run in-between them. Eaton Place, which was built at the same time, is commonly viewed as an additional extension to the square.

Located near Eaton Square, Chester Square is a fairly small residential square, with several of the properties having Venetian bay sash windows. Like much of Belgravia, Chester Square was also built by the Grosvenor family.

Wilton Crescent was designed by Thomas Cundy II, the surveyor for the Grosvenor family’s estate, in 1821. The crescent is located near Belgrave Square and Lowndes Square.

Like Belgrave Square, several of the houses in Lowndes Square were designed by George Basevi.

The square is located near Knightsbridge tube station and is home to the Pakistan High Commission and the Park Tower Hotel.

At The Sash Window Workshop we have extensive experience working on properties in Belgravia, carrying out multiple installations and repair work to windows and doors in the area every year.

We are period property specialists and understand the additional difficulties that can arise from working in older buildings. Where necessary, we can comply with conservation area and listed building requirements.

To replace or repair your wooden windows and doors, contact us today for a free, no obligation quotation on: 01344 868 668. 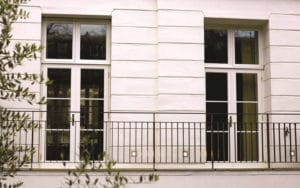 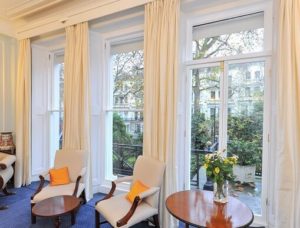 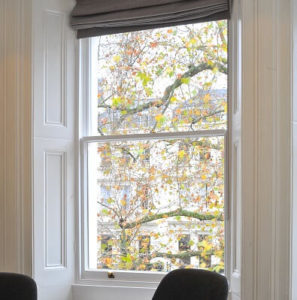