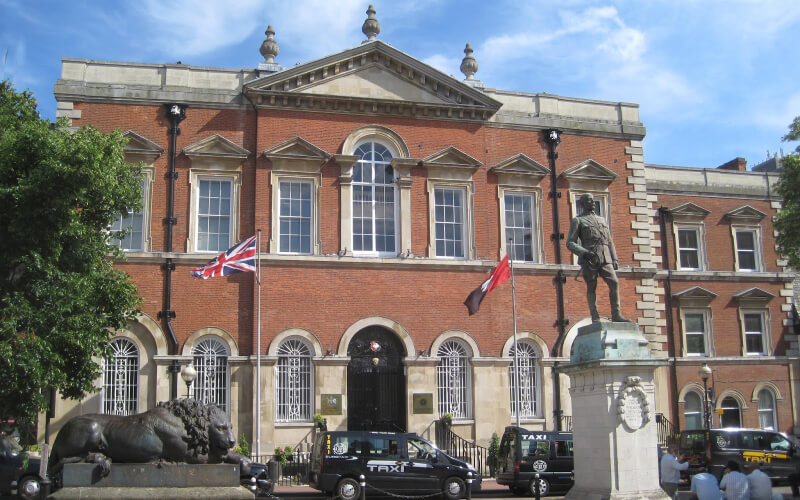 Aylesbury sits on the site of an Iron Age hillfort that is believed to date from around 650BC. The name Aylesbury derives from when the town was a Saxon settlement called Aegel’s burgh.

Aylesbury was a large village during the Saxon period, with a population of only a few hundred. Most of the village’s population made a living from farming and there was a regular market.

When King William of Normandy ousted the Saxons from Aylesbury he decided he liked the place and took the manor for the crown. By the 13th Century the village had two fairs which people would attend from all over Buckinghamshire.

There had been rivalry between Aylesbury and Buckingham for a couple of centuries regarding which one should be considered the county town. Whilst Buckingham was originally been granted that status in the early medieval period and lent its name to the county, in 1529 Henry VIII granted Aylesbury county town status, making it the new administrative centre of Buckinghamshire.

In the 17th and 18th Centuries there was a large lace making industry in Aylesbury. Aylesbury was also a coaching town and was located along on several important routes meaning that many stagecoaches stopped at the towns inns.

A canal was dug to Aylesbury in 1814. In 1839 Aylesbury was connected to the London to Birmingham railway, before being connected by rail to High Wycombe in 1863. The railway helped increase the population of Aylesbury, which grew much bigger during the 19th Century.

In the early 19th Century the lace industry declined. Aylesbury’s silk, printing and brewing industries all grew and in the late 19th Century condensed milk was made in the town.

The famous Victorian clock tower was built in 1876 and unlike several other towns, Victorian Aylesbury remained a market town rather than a manufacturing centre.

Aylesbury Vale is today the fourth fastest growing local authority in the south east of England. It has grown rapidly in recent years, with on average 750 new houses (source) being completed each year. 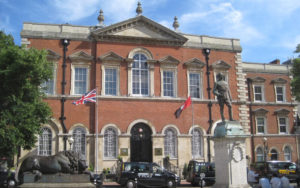 Originally built as the County Hall, the Crown Court was built in the 18th Century and is grade II* listed. The building was designed by Thomas Harris of Cublington and built by Thomas Harris. Work started on the building in 1722, but was then delayed for 13 years due to a lack of funds and political feuding. Work was eventually completed on the exterior in 1737 and on the interior in 1740.

The building is designed in a classical Palladian style, with some baroque features, and is one of the earliest examples of a Palladian building outside London. The far left ground floor window was originally the entrance to the gaol, which was built behind the hall.

By the 1840s conditions at the prison at the rear of the County Hall were deemed as poor. It was therefore decided to build a new prison, which was opened in 1847. After the demolition of the old gaol, new Judge’s lodgings were constructed, in 1849-50, at the back of County Hall. The new Buckinghamshire County Council established in 1888 following the new Local Government Act was also based in County Hall until the Old County Offices were built in Walton Street in the 1920s. 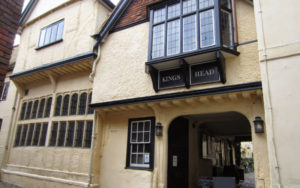 The King’s Head dates to at least 1386 and is today owned by the National Trust. The first buildings consisted of 3 shops and a cottage. There was a cellar underneath one of the shops which was a tavern called the King’s Head, which is the only part that remains of these buildings today.

The King’s Head properties were purchased by William Wandesford in 1455. However, Wandesford forfeited his estates in 1465 to Sir Ralph Verney because he supported the Lancastrian house during the War of the Roses. Between 1485 and 1480 Verney demolished some of the older buildings and acquired adjacent land to build a Great Hall.

A stained glass window within the Great Hall commemorates famous figures from the period when the inn was built, including: Henry VI, Edmond Beaufort, William de la Pole, Margaret of Anjou and James Botlier. In the late 15th Century the Great Hall was extended to include a parlour and stable accommodation around the Courtyard.

Today the buildings are home to the pub, a Tourist Office, a coffee shop selling second-hand books, and a florist.

During the 1950’s and 1960’s thousands of new homes were constructed in Aylesbury to relocate Londoners. This was unfortunately followed by the demolition of some of Aylesbury’s ancient buildings. However, timber windows can still be found across the centre of Aylesbury.

The Sash Window Workshop has over 20 years’ experience manufacturing and installing timber windows and doors in period properties across London and the South. If your timber windows or doors need replacing or repairing, contact us for a free, no obligation quotation on: 01344 868 668.