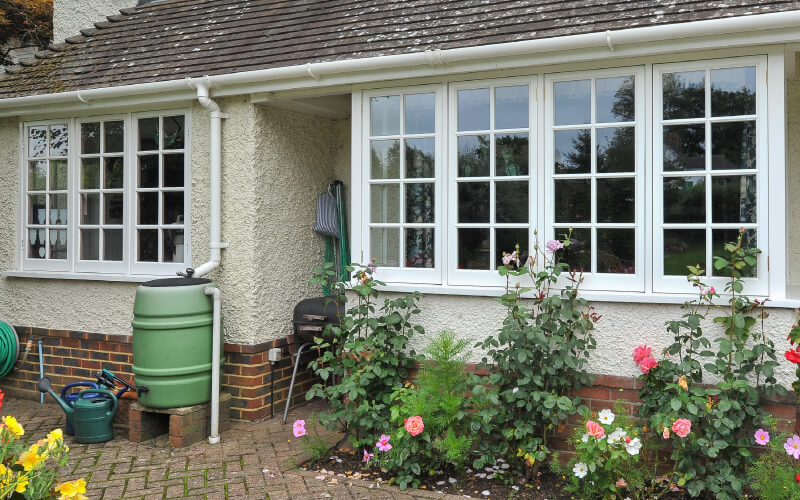 Many homeowners choose casement windows as an alternative to more traditional double hung windows. A casement window consists of one or more individual sashes that are attached to the walls using hinges; allowing the windows to swing open and closed.

Traditionally casement windows were subdivided by glazing bars that joined together the smaller panes of glass and earlier designs of casement windows involved the ‘opening part’ of the window being made from iron with lead latticing around the frame. By the late eighteenth century, the entire window was made from timber.

In the nineteenth century, designs of the window were occasionally elaborated for more gothic style buildings and included an average of six panes of glass. Now, since technology has improved, casement windows are normally made up of two panes of glass with just one horizontal bar.

The construction of traditional casement windows

Double glazing is naturally a more modern idea and is reasonably new when it comes to casement windows. It is employed for thermal efficiency and is now a building regulation of all new builds. However, due to recent advances in technology, the thickness of the double glazing glass has reduced significantly.

There are a variety of designs available for casement windows, this includes: a range of finishes, colours and accessories. You can also add a number of optional extras to your windows such as surface grills or lead grills.

With the use of different designs and extras you can ensure your windows stand out.

Casement windows provide higher security due to the fact they are extremely difficult to break into. The locks on the windows are hook-shaped and are embedded within the window frame ensuring they are difficult to get hold of.

It can be challenging to open a heavy double hung window as it takes two hands which can be difficult for someone with a physical disability. However, casement windows have a crank mechanism which allows for single-handed operation. Due to their convenient nature, many home owners decide to install them in hard to reach areas.

If you have decided to install casement windows you can get a free on-site survey by contacting our team on: 01344 868668.