The History and Architecture of Chichester, West Sussex

Chichester was founded by the Romans when they landed in 43 AD. The Romans built a fort on the River Lavant to receive supplies from France and named the settlement “Noviomagus”. In Roman Chichester the rich lived in houses with glass windows, mosaic floors, painted murals on walls and even a form of central heating. However, by the end of the 4th Century the town began to decline.

When the Saxon’s arrived in the 6th Century they named the town “Cissa’s Ceaster”. The town was named after a Saxon called Cissa and ceaster refered to a group of old Roman buildings. This name was then was shortened to “Cisscester” and eventually becoming “Chichester”.

In the late 9th Century Alfred the Great made Chichester a fortified town. Around the same time, Chichester became a flourishing market town.

Towards the end of the middle ages in the 16th Century, Chichester again went into decline. In the 18th century, the Georgians made various improvements to the town, including opening their first theatre and their first bank. During the Georgian period, Chichester was a town of craftsmen working in their own workshops with an apprentice.

In the 19th Century Chichester began to grow again alongside the growth in Britain’s population. Since then, whilst modernisation has occurred, Chichester has remained relatively undeveloped and much of its heritage remains today.

Pallant House was built in 1712 by Henry Peckham and is a grade I listed Queen Anne townhouse.

The house is known locally as Dodo House on account of the misshapen ostrich sculptures which guard the approach to the front door.

Since 1919, the house was used as Council offices for Chichester District Council. The building was restored in 1979 and prepared to open as both a historic house and modern art gallery after Walter Hussey, the Dean of Chichester, agreed to donate his collection of modern art to the city of Chichester on the condition that they were housed in Pallant House. The art gallery opened in 1982.

Edes House is grade I listed and was built in 1696 for local maltster John Edes. The house pre-dates the Georgian building boom that saw many of Chichester medieval wooden framed buildings being replaced or upgraded and was the first true new-build of the Baroque period.

The house was described as Westgate House in the will of Elizabeth Penfold in 1841. In 1905 the property was called West Street House and by 1911 it had changed its name again to Wren’s House. In 1993, it was renamed Edes House in recognition of the Edes Family.

The building was bought by West Sussex County Council who used the building as their offices until the current county hall was built in 1936. The building was also used as the county library headquarters and county and diocesan record offices.

The house was then restored in 1989. The house is now used as a venue for corporate events, weddings and community meetings.

St Mary’s Hospital is a 13th Century hospital and is one of the oldest almshouses in the country. The hospital is still in use today, providing housing for many elderly people.

The building is unique in England and only one other smaller version is known to exist in Germany.

Medieval hospitals served the needs of the sick, the poor and travellers and were concerned with both spiritual wellbeing as well as medical care.

The Greyfriars donated the site in the 13th Century. The building work was completed by 1292.

The original building was converted during the 17th Century into eight single bedroom flats. Towards the end of the 19th Century the two western bays were demolished. This space now serves as an entrance courtyard.

During the middle of the 20th Century improvements were made to the building and the number of flats was reduced to five. In 2003 the medieval hospital underwent a major renovation project resulting in the upgrade of the residents’ accommodation into four larger apartments.

When the contract for retiling the roof was tendered a few years ago, it was reputedly the largest tiling job in the UK at the time.

As St Mary’s Hospital is primarily a home rather than a historical building, it is not open to casual visitors.

Chichester is today home to a number of historic and listed buildings. The majority of buildings in the Pallants date from the period 1720 – 1750 and timber sash windows can be found on buildings across the city centre.

To obtain a free, no obligation quotation to repair or replace your timber windows or doors, contact The Sash Window Workshop on: 01344 868 668. 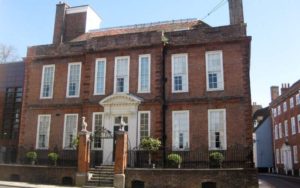 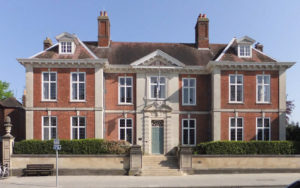 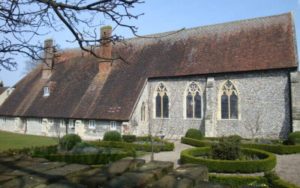