Queensway tube station opened on the 30th July 1900, when it was known as Queen’s Road, and is an unusual survivor of the buildings designed for the Central London Railway by Harry Bell Measures.

Queensway station is located on the road of the same name. However, similar to the tube station, the road has also had different names over the years, previously being known as Black Lion Lane and then Queens Road.

Queensway tube station is located in the City of Westminster borough in Central London. The station is often referred to as being in the Bayswater area, which is home to several roads with Victorian stucco terraces, the majority of which are now divided into flats.

Several of the properties in Queensway and the Bayswater area still have traditional timber sash windows. Queensway, like much of Bayswater, also has its own conservation area, helping to protect the heritage of the area.

Located on Queensway, Whiteley’s department store is a Grade II listed building, which was built by Belcher and Joass between 1908 and 1912. The building was later extended between 1925 and 1927.

It was constructed from Portland stone with large bay and arched windows on the upper floors.

In December 2018, Whiteleys closed for redevelopment and refurbishment and is expected to reopen in 2022.

At The Sash Window Workshop we specialise in the manufacture and installation of traditional timber windows and doors and have extensive experience working to different London conservation area and listed building requirements.

If your windows do not need replacing, we also offer a draught proofing and overhaul service, designed to improve the thermal efficiency of your windows.

If you are traveling to or from Queensway tube station, look out for our advert which will be at the station until the 17th November! 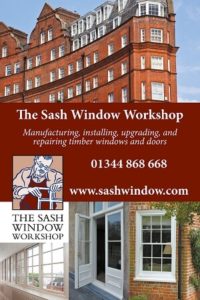