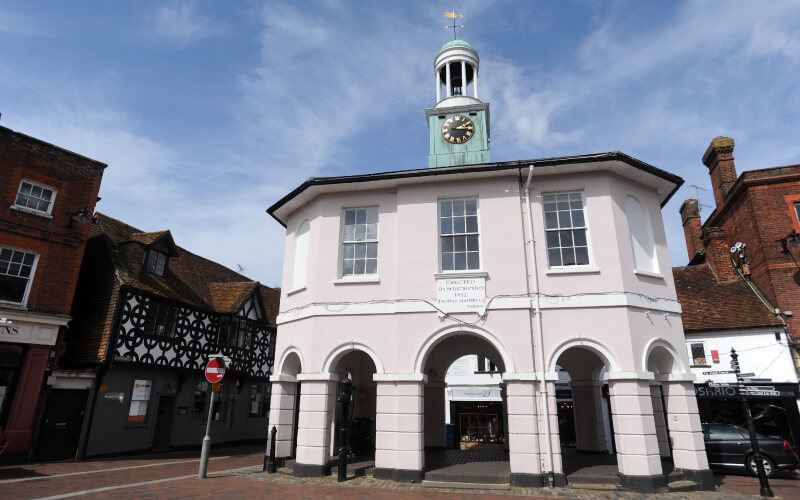 Godalming in Surrey lies in the valley of the River Wey and has a long history, potentially dating back to the 7th and 8th centuries.

The town was an important market town in the Middle Ages and received the first known grant to have a market and annual fair in 1300.

With the close proximity to the River Wey, Godalming had grown into a thriving centre for woollen trade and the cloth industry by the 16th century. The papermaking industry grew in Godalming from the middle of the 17th century, with the river powering the local mills. The coming of the railway in 1849 continued Godalming growth.

Godalming was the first town in the country to receive public electricity supply in September 1881 with a plaque commemorating the event located in the old town hall.

The Parish Church
The original church of St Peter and St Paul in Godalming existed by the 9th century and fragments of sculpture dating to this period have been found in the churchyard.

The church was largely rebuilt during the early Norman periods and is Godalming’s only Grade I listed building. The nave and spire date from the 12th and 13th centuries and further restoration was carried out in the 19th century.

The windows located in the church tower are still the original Saxon windows. 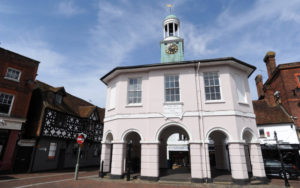 The Old Town Hall (The Pepperpot)

In 1814, Thomas Haines hired architect John Perry to build the Old Town Hall after the previous building had fallen into disrepair. The building is commonly known as the Pepperpot due to it’s unusual octagonal shape and similarity to a Georgian silver pepper box.

In 1892 an external staircase was added to the building and in 1900 there was a public petition launched against the Council’s proposal to demolish the Pepperpot.

The Grade II listed, Georgian building operated as the Borough’s town hall and housed the town council until 1907 when the building became too small, resulting in the council moving to new offices in Bridge Street. Today the upper part of the building is used as a function room, with the lower section being used as a meeting place and for market stalls.

A tall iron hand lever pump can still be found at the Pepperpot, which provided a communal water supply before mains water was installed in the town.

In 1872, Charterhouse School relocated from London to a new building in Godalming designed by architect Philip Charles Hardwick and built by Lucas Brothers, who also built the Royal Albert Hall.

The school has a number of famous former pupils, including Peter May, ex-England cricket captain, Jonathan Dimbleby, TV and Radio presenter, and members of the band Genesis.

The Victorian Gothic building is built out of local Bargate Sandstone from quarries around the School ground.

The Old Chapel served the School until the Memorial Chapel opened in 1927. The window at the east end of the chapel was a gift from Queen Victoria. Though the chapel is now blocked up from inside it can still be seen from the private area for the Gownboys boarding house.

As the school has grown, various additional buildings have been built in the grounds, including the hall, built in 1884, which was designed by Sir Arthur Blomfield, who also designed the Royal College of Music.

There are a number of old shops in Godalming High Street dating from the 16th and 17th centuries, with a high number of homes built alongside the growth of the town between the 16th and early 20th century. This continuous growth has resulted in a mixture of windows across the town, including both Tudor casement windows and Victorian sash windows.

Like many historic towns and cities across the UK, Godalming has a number of listed buildings and conservation areas protecting the local heritage of the town.

If you are a homeowner in Godalming and your timber windows need repairing or replacing, contact us today or call us on 01344 868 668 to arrange a free, no obligation site survey and quotation.