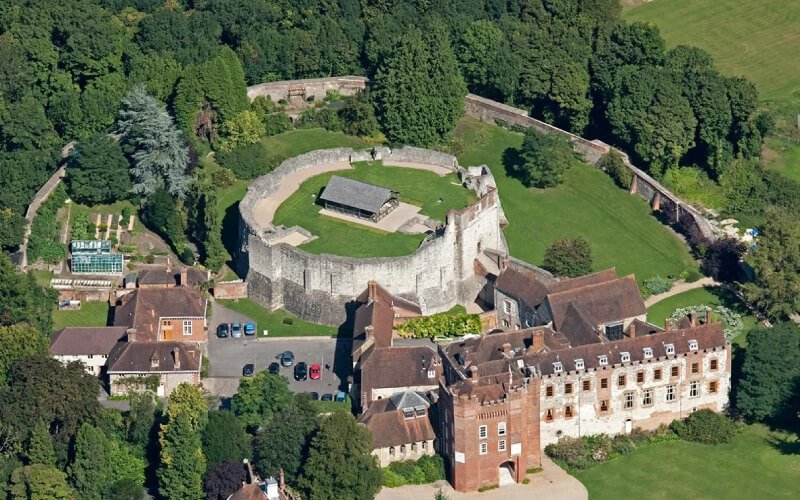 Farnham’s history is believed to date back to the Stone Age, with the first known settlement dating back to the Mesolithic period.

During the Roman period, pottery was manufactured in several kilns around Farnham. The remains of a Roman villa and bath have also been found in the surrounding area.

In the Saxon era Farnham was given the name Fearnhamme and from 803 AD the town belonged to the Bishop of Winchester.

Waverley Abbey, the first Cistercian abbey in England, was founded in Farnham in 1128 by William Giffard, Bishop of Winchester. Both King John and King Henry III visited Waverley Abbey before it was passed to the King’s treasure as part of the dissolution of the monasteries by King Henry VIII in 1536.

Being situated where two important roads (one from the East to the Southwest and the other from London to Southampton) crossed, Farnham grew and had a weekly market.

In 1249, the Bishop of Winchester gave the people of Farnham a charter, giving them some independence from the Bishop.

During the 16th and 17th Century several industries evolved in Farnham. There were large wool and cloth industries, and the town was also known for making greenware pottery. Towards the end of the 16th Century and the start of the 17th Century, Farnham also became known for its wheat industry and hops were grown locally.

During the 19th Century, Farnham grew rapidly in size. At the start of the century, the population was 4,321 and by the end of the Century it had risen to over 14,500. This growth was partly due to the arrival of the London and South Western Railway in 1848, with people choosing to live in Farnham and commute into London for work. One of the other big factors in the growth of Farnham was Aldershot becoming the ‘Home of the British Army’. As a result, many officers and their families choose to live in nearby Farnham. 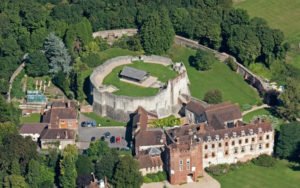 In 1138, Farnham Castle was built by Henry de Blois, the brother of King Stephen, to provide accommodation for the Bishop of Winchester on his journeys between Winchester cathedral and London. The castle was then rebuilt in the late 12th and early 13th Centuries.

In the 1520s major renovations were made to the Castle by Bishop Fox, including modifications to the tower and south side of the building.

Farnham Castle played a large part in the English Civil War. The Castle was considered a potential rallying point for Royalists, resulting in a Roundhead garrison being installed in 1642. However, with the King’s forces moving southwards, the garrison commander decided to evacuate. The Castle was then in Royalist hands until Parliament despatched Colonel Sir William Waller to retake the Castle. The Castle was keenly fought over until the end of the war.

The Castle has undergone various periods of neglect and subsequent restoration projects over the years. Today the Castle is looked after by the Farnham Castle Charity and the tenants of the various buildings. The Keep is looked after by English Heritage and is open to visitors most weekdays. Other parts of the Castle are privately owned, although the Castle can be hired as a venue for events, meetings and weddings. 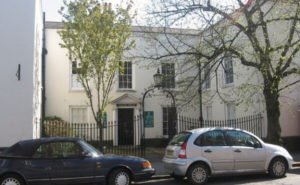 Vernon House is a Grade II* listed building which was originally built in 1563.

In 1649, King Charles I stayed at the property on his way to his trial and execution in London.

The building has been altered several times, with the street front dating from 1721. Changes were also made around 1860 after a fire.

The front of the property therefore appears as Georgian style architecture, with a symmetrical exterior and multiple 6 over 6 timber sash windows.

Today the property is home to Farnham Register Office and houses Farnham Library in a separate building in the gardens behind Vernon House. 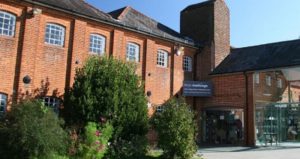 The south wing of Farnham Maltings was originally used as a tannery and dates back to at least the 1750s. In 1845, the building was sold to John Barrett who converted it into a brewery. Barrett then extended the property, constructing additional buildings along the river front in the 1870s.

The east wing was originally a separate building and in 1830 it was used for the malting industry. However, the east wing was brought by John Barrett in 1881, combining the buildings into one business.

In 1890 the whole property was bought by George Trimmer of the Lion Brewery. The business was known as the Farnham United Breweries and a sign with this name on can still be seen on the building.

The property has undergone several refurbishment projects over the years, preserving the exterior of the buildings, which still have multiple timber sash windows.

In 1925 Courage Breweries took over Farnham United Breweries. Malting continued at the site until 1956. Over the following twelve years the building was empty and fell into disrepair. Initially Courage planned to sell off the site for redevelopment. However, in 1969 the residents of Farnham successfully teamed up to purchase The Maltings to be an arts and community centre.

Farnham is home to several historic buildings, with a high number of Georgian properties. This means that wooden sash windows can still be spotted on several buildings around Farnham, particularly around the town centre.

There are three conservation areas in Farnham covering the town centre, Great Austins and Old Church Lane areas. There are also over 300 listed buildings in the town, helping preserve the heritage of the area.

At The Sash Window Workshop we have extensive experience working on period properties and in conservation areas. Established in 1994, we specialise in the replacement and repair of timber windows and doors. To obtain a free, no obligation quotation contact us on: 01344 868 668.