The town of Epsom dates back to the Anglo-Saxon period. However, the town is believed to have been the location of a Roman villa, with Roman bricks and tiles found near Epsom Court.

In the Doomsday Book, Epsom is named as Evesham and is detailed as coming under land owned by Chertsey Abbey. The manor remained in the hands of the Abbey until the dissolution of the monasteries. There was then a succession of lords of the manor until the lordship was purchased by Epsom and Ewell Borough Council in 1955.

At the start of the 17th Century, Epsom was a small rural community. However, with the discovery of water rich in magnesium sulphate, later known as Epsom salts, Epsom became known as a spa town and began to expand rapidly. A water pump, wells and assembly rooms were built to support the growing industry.

By the middle of the 18th Century, the popularity of Epsom spa had started to decline, with more people choosing instead to travel to Bath. However, horseracing had become a new attraction in the area, which grew in popularity further when the Derby was established in 1780. The Derby later became the most famous horse race in the world.

The arrival of the railway in 1847, resulted in more houses being built with the town becoming a commuter town for people working in London.

Epsom Urban District Council was established in 1894, before becoming Epsom and Ewell Borough Council in 1937.

Epsom Clock Tower was originally built in 1847 and replaced a 17th Century watchhouse. The building was designed by London architects, James Butler and Henry Hodge.

The tower was built to be 70 feet, constructed from red and Suffolk brick and designed in a Byzantine style. The tower also had lions made from Caen Stone at the four corners of the tower base.

The tower has undergone several alterations over the years, including a bell being added in 1867 and the lions being replaced by lanterns in 1902. The lanterns were later replaced by the current globe lights in 1920.

The Assembly Rooms in Epsom were built in 1692 and are the oldest surviving of this type of building in England.

The building, which is now a pub, was originally built to house meeting rooms and entertainment rooms, with a coffee house, tavern, billiard room and gaming rooms. There were also shops, with the tenants in 1735 including a pastry cook and baker.

The Assembly Rooms are believed to be unique in their layout, allowing for carriages to be driven throughout the full length of the downstairs alley and courtyard.

By 1790, the majority of the building had been converted for the use of private families and in 1814 the building was auctioned as three separate lots. The building had several tenants throughout the 19th and 20th Century, including being home to John Baily’s famous draper’s shop. However, the high number of different tenants resulted in major structural alterations to the building.

In recent years much of the original façade and internal layout has been recreated, including installing several sash windows. Today the Assembly Rooms are Grade II* listed, helping to preserve the building’s heritage for future generations.

The town is home to several Queen Anne, Georgian, Victorian and Edwardian properties, meaning that timber sash windows can be spotted across the centre of Epsom.

The Sash Window Workshop have over 25 years’ experience manufacturing, installing and repairing timber windows in period properties. We are specialists and have previously carried out multiple projects in the KT17 area. 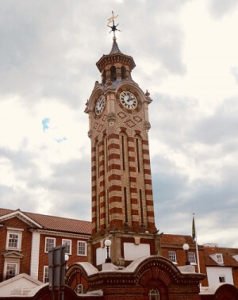 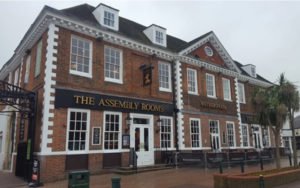