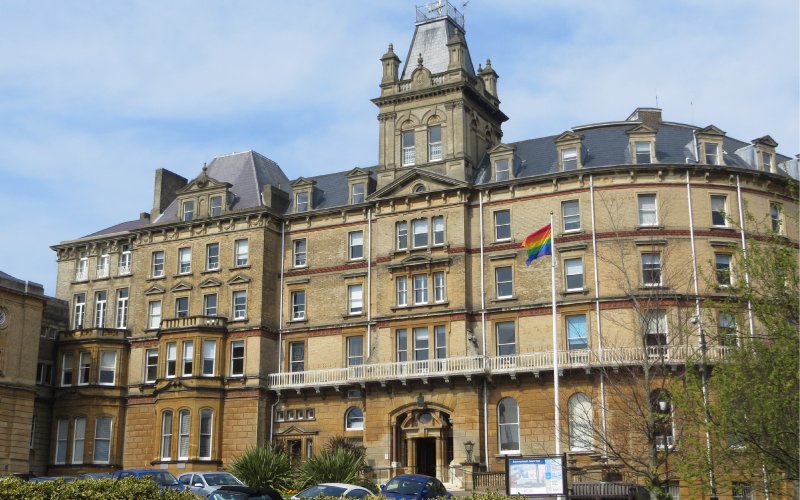 Bournemouth’s history dates back to the late Georgian period. Before the 1800s, most of the town was remote and barren heathland with the only regular visitors in the 16th century being fishermen, turf cutters and gangs of smugglers.

The Christchurch Inclosures Act 1802 and the Inclosure Commissioners’ Award of 1805, transferred 5000 acres into the hands of five private owners, including James Harris, 1st Earl of Malmesbury, and Sir George Ivison Tapps.

In 1810 Lewis Tregonwell, a retired army officer who is generally regarded as the first resident of Bournemouth, visited Bournemouth beach with his wife and decided to build a house nearby. Tregonwell then brought some land from Tapps and built a house with cottages for his butler and gardener.

In the 19th Century spending time at the seaside had become popular amongst the middle and upper classes. In 1836, Tapps’ son Sir George Tapps-Gervis, who had inherited his father’s estate, hired Benjamin Ferrey to build several villas for families to hire over the summer. By 1840 a small village had started to appear, and stagecoach began stopping in Bournemouth.

With the arrival of the railway in 1870, the population growth and the number of visitors to the town increased. Victorian Bournemouth grew at a phenomenal rate. Villages nearby were also growing rapidly and in 1876 nearby Boscombe and Springbourne were made part of the town. By 1881 the population stood at 16,859 before increasing to 37,000 in 1891 and 59,000 in 1901.

In 1939, school children from Portsmouth and Southampton were evacuated to Bournemouth to escape heavy bombing during the Second World War. However, Bournemouth was also bombed damaging the seafront.

In 2012 Bournemouth was unsuccessful in their bid for city status, losing out to Chelmsford. 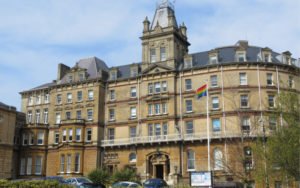 Originally operating as the Mont Dore Hotel, worked started on the building in 1881. The hotel was built as a health resort where guests were given spring water.

The building, which is now Bournemouth Town Hall, was designed by Alfred Bedborough in French, Italian and neo-classical styles. The foundation stone was laid by King Oscar II of Sweden and Norway and the building was completed in 1885.

During World War One the hotel was used as a hospital for British and Indian soldiers, before being used as a convalescent home. It was purchased by Bournemouth Borough Council in 1919 and in 1921 was turned into the Town Hall.

Bournemouth Town Hall, which is now Grade II listed, was extended in 1930, adding a Council Chamber before being extended again 1990. The building, which is large and impressive, still has several one over one Victorian sash windows, retaining its heritage as a Victorian period building.

Grade II listed building, the Pavilion Theatre was opened in March 1929. The building was designed in the Art Deco style with square Corinthian columns at the front of the building.

Original proposals for the Pavilion were put forward in the late 1800s and the architectural competition was won by a firm of architects called Home and Knight.

Numerous further alterations have been undertaken since it was first built, including the addition of two storeys to either side of the main entrance in the early 1950s. In 1998 the building became Grade II listed, protecting its future.

The Pavilion Theatre underwent a £12 million restoration project in 2007 – 2008 to sympathetically refurbish the property. The work involved removing the 1975 extension, improving service and drainage to the building and repairing the period features of the building to their former glory. 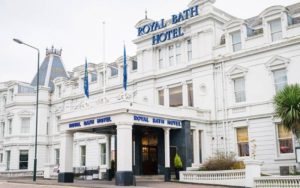 Bath Hotel, now part of the Royal Bath Hotel, was Bournemouth’s first hotel, initially opening on Queen Victoria’s Coronation Day. Designed by Benjamin Ferrey and built in 1838 it is one of the oldest buildings still standing in the town and has a blue plaque outside.

The Grade II listed building was built in Classical style with columns and one over one Victorian sash windows. In 1878 – 1880 the hotel was vastly extended by Sir Merton Russell-Cotes.

Several celebrities and members of the royal family have stayed at the hotel, including Prince of Wales, Edward VII who stayed at the hotel in 1856. Later, David Lloyd George, Benjamin Disraeli and Oscar Wilde were frequent guests to the hotel.

Today the Royal Bath Hotel still operates as a 4 star hotel in Bournemouth.

Bournemouth is home to several Victorian and Edwardian architectural buildings, meaning timber sash windows and timber casement windows can be found across the town.

There are 20 different conservation areas in the Bournemouth and over 300 listed buildings in the borough. The borough also has their own locally listed buildings which are important to the local area but are not listed by Historic England.

The Sash Window Workshop has been manufacturing, installing and repairing timber windows and doors in period properties since 1994. We have extensive experience complying to conservation area and listed building regulations. All our replacement windows and doors are bespoke and manufactured with a high level of attention to detail.