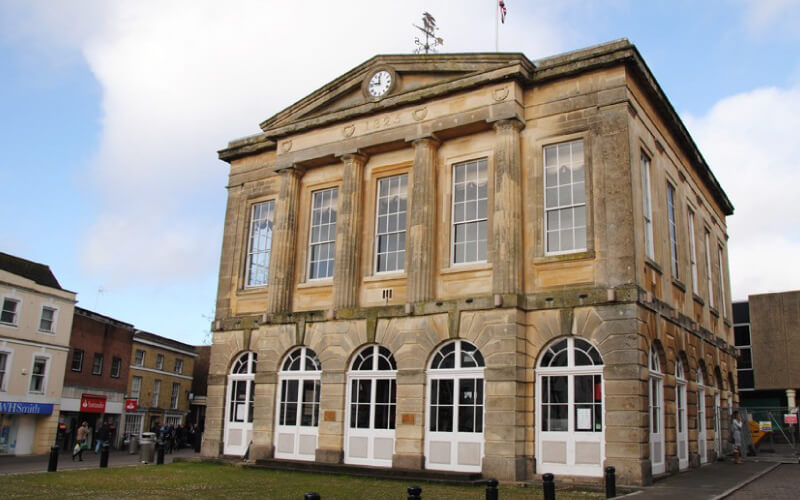 Andover started as a Saxon village. It was first mentioned in history was in 950 AD when King Edred built a royal hunting lodge in the village.

Just over ten years later, in 962 AD King Edgar called a meeting of the Saxon ‘parliament’ (the Witenagemot) at his hunting lodge. In 994, Olaf, a Viking King, was baptised in Andover’s church as part of an agreement made with King Ethelred II of England.

By 1086, Andover had 107 male inhabitants documented in the Domesday Book. This represented quite a large settlement by the standards of the time, with most villages having between 100 and 150 people. Andover also had 6 watermills which ground grain to flour to make bread.

The main industry in Medieval times was making wool. There was also a leather industry, lime burning industry and parchment manufacturing industry.

Medieval Andover had two severe fires. The first fire was in 1141 during the civil war, when a house was set on fire. The fire then spread, engulfing the town. The second fire was in 1435, which was an accidental fire believed to have started in a butcher’s shop before spreading across the town.

In 1175 King Richard I sold Andover a charter granting the townspeople some rights, founding a merchant guild to govern the town. The members elected two officials called bailiffs who were responsible for running the town.

In 1599, the town received a charter from Elizabeth I, allowing the number of annual fairs to increase from one to three.

During the 18th Century, due to Andover being on the main Exeter – Salisbury – London road, the town became a major stopping point, with more than 30 stagecoaches passing through the town every day.

Andover was linked to Basingstoke, Salisbury and London by railway when the Andover junction station was opened on 3 July 1854.

During the 18th Century the wool industry in Andover declined, before it ceased altogether in the 19th Century. However, brewing became an important industry in the town and in 1813 Takers iron foundry was established.

In 1960 it was decided that Andover should become an overspill town for London. In 1961 a plan was drawn up to greatly expand Andover, increasing the population to 47,000 by 1982 with about 20,000 of the extra population being ‘immigrants’ from London.

Today the population of Andover is 52,000, with the town’s largest employer being the Ministry of Defence. 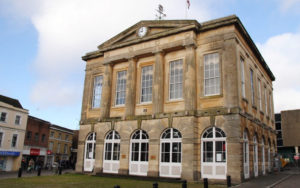 The Grade II* listed guildhall was built in 1825 as Andover Town Hall. It was built to typical Classical Georgian architecture, similar to that of the previous guildhall of 1725 to 1825.

The guildhall is still owned by the local council and can be hired for events.

The Angel Inn is Andover’s oldest and most historic inn, and one of the oldest pubs in England, dating back to 1174. However, the original building was almost completely destroyed in the fire of 1435 before being rebuilt in 1445.

As part of the rebuild the King’s carpenter, Robert Whetely, was consulted on the design, highlighting the high specification of the new inn which was aimed at attracting the top end of the market.

The Grade II* listed inn has hosted several royal visitors over the years, including Edward I, Henry VII and Catherine of Aragon.

The inn has undergone various additional alterations over the years. When the 1445 Angel Inn was built, it was twice the size of the building today, with the current building comprises only of the north and east wings. Today the building has multiple 18th Century sash windows with no horns.

Today there is a wide range of sash and casement window styles across Andover, with a mixture of period properties alongside newer homes.

Andover is home to a conservation area, covering some of the roads in the town centre, and several Grade II listed buildings, helping to preserve some of the town’s rich heritage.

At The Sash Window Workshop we have over 20 years’ experience working on period properties, including listed buildings and those in conservation areas. If your timber windows or doors need repairing or replacing, contact us on: 01344 868 668.