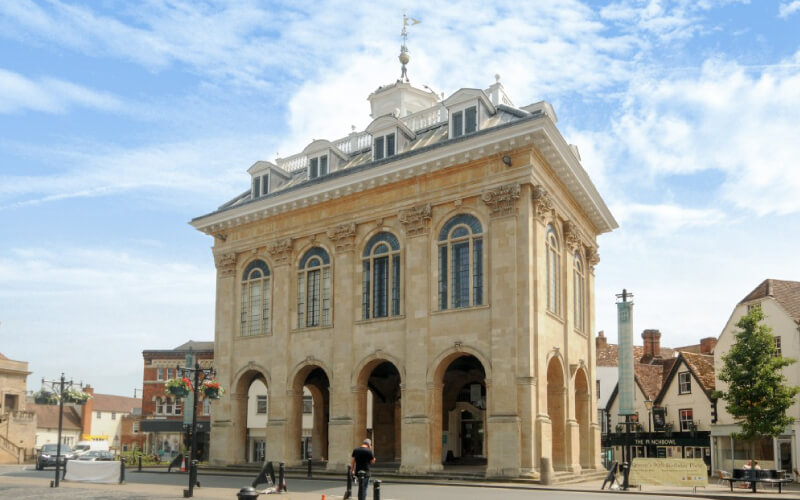 Abingdon is argued to be Britain’s oldest town. With archaeological discoveries dating back to the late Iron Age, the area is believed to have attracted early settlers due to the food and trading opportunities that the River Ock and River Thames provided.

During the Roman period, Abingdon developed into a small Roman town. Several buildings have been identified by excavations, with stone walls from the 2nd century onward.

The town’s history is closely intertwined with that of Abingdon Abbey. During King Alfred the Great’s reign, the Abbey was burnt to the ground by the Danes from Reading. King Edgar the Peacemaker was later educated at Abingdon Abbey. The monastery by then was very neglected and run down and Edgar promised that if he became King he would strive to restore all neglected churches. Shortly after his coronation, Abingdon was the first of several Abbeys to be rebuilt.

In the 13th and 14th centuries, Abingdon was a flourishing agricultural centre with an extensive trade in wool and a famous weaving and clothing manufacturing industry, with the Abbot holding a regular market in the town.

While the Abbey provided employment in the town, it was not a universally popular institution. The townsfolk were unhappy about the Abbot’s hold over Abingdon and his control of the market. In the early 1300s a group of angry men tried to burn down the Abbey gate. However, they were unsuccessful with the monks defended themselves. A few days later, a huge crowd of Oxfordians arrived in the middle of the night to assist the townsfolk and a violent riot broke out. The Abbey gates were burnt down and the monks were attacked, with a number being killed.

After the abbey’s dissolution in 1538, the town sank into decay. In 1790 Abingdon Lock was built and in 1810, the Wilts and Berks Canal opened, linking Abingdon with Semington on the Kennet and Avon Canal. Abingdon became a key link between major industrial centres such as Bristol, London, Birmingham and the Black Country.

Abingdon became the county town of Berkshire sometime after receiving its Royal Charter in 1556. Assize courts were held in Abingdon from 1570, but in the 17th century it was vying with Reading for county town status. The county hall and court house were built between 1678 and 1682, to assert this status. However, Reading became the County Town in 1869.

In 1974, under local government reorganisation, Abingdon became part of the non-metropolitan shire county of Oxfordshire. 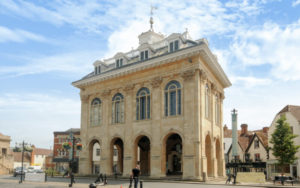 Abingdon’s County Hall Museum was built between 1677 and 1682 and is believed to have the grandest town hall in England. The Grade I listed building was built by Christopher Kempster, possibly using a design by Christopher Wren, and stands on columns, leaving the ground floor open for a market.

The hall was built to house the Berkshire Assize Courts, the location for 200 years of some of the County’s most important criminal trials.

The building has three storeys, including the roof space which features eleven dormer windows. The first floor comprises a grand salon which is known as the Sessions Hall because it was originally built to function as a courtroom when needed.

Today, the building is home to the Abingdon County Hall Museum and run by English Heritage. On special local and national occasions, the Mayor of Abingdon and other dignitaries throw buns to the crowd in the Market Place from the roof of the building. The origin of this ceremony is unknown, but the earliest recorded bun throwing was to celebrate the coronation of King George III in 1761.

East Helen Street is one of the earliest roads in Abingdon, with Roman remains being found under numerous houses in the street.

Many of the houses on the street have medieval cellars. Some of the features in the cellar at number 30 (St Ethelwold) are believed to date from the 13th Century and the property’s ceiling beams are early 16th Century. The long timber-framed range to the rear of the property dates from 1453-4 and still has an original window from this date.

Twickenham House (20 East Helen Street) was built in 1756-7 for Joseph Tomkins, a wealthy local family of maltsters. The architect of the house is believed to have been Sir Robert Taylor. The Grade II* listed house is noted for its splendid brickwork. It has two storeys plus attics with dormer windows. At the back of the house there is a large domed lantern with three windows.

Unicorn House (number 28) was built in 1617. The Grade II* listed house is one of the largest and most impressive houses in East St Helen Street. The building was originally built for commercial use, possibly as an inn. In 1679 it was brought by Thomas Medlycott, recorder of Abingdon and future MP, who converted it into a dwelling house, probably removing the gables and putting in sash windows. A plaque at the house commemorates a visit to the house by William of Orange in 1688 on his way to London to claim the throne.

Timber sash windows can be found across Abingdon town centre, with casement windows more popular in the outskirts of the town.

The Sash Window Workshop has over 20 years’ experience replacing and repairing timber windows and doors in period homes. To obtain a free, no obligation site survey and quotation, contact us on: 01344 868 668.