A Window Into Films: The King’s Speech 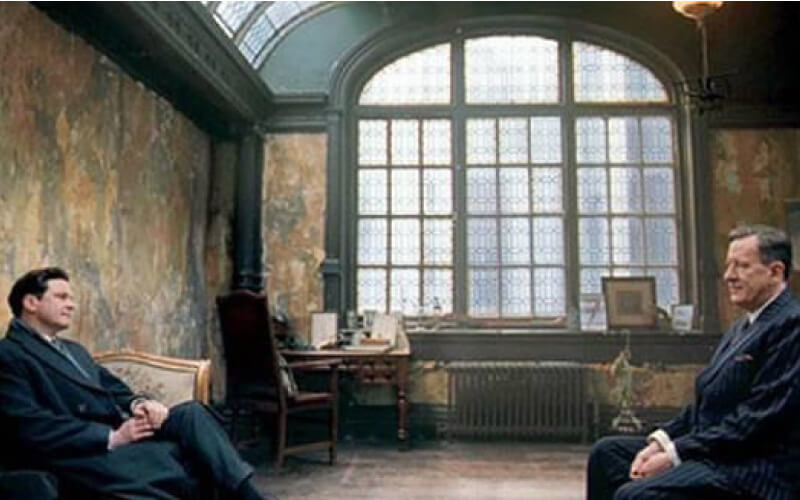 We’ve been watching films again! And yes, Colin Firth has a certain appeal but like always, we were strangely drawn to the architecture and surroundings… we just can’t help ourselves!

The King’s Speech was inspired by the story of self-taught speech therapist, Lionel Logue, and his unlikely relationship with the then-Duke of York. We see Logue – a ‘commoner’ with no formal training and viewed by many as a ‘quack’, and the Duke with a severe stammer and whose brother’s abdication catapults him on to the throne as King George VI, with a potentially humiliating schedule of public speaking.

The film starts with the Duke’s attempt to deliver the closing speech at the 1925 ‘Empire Exhibition’ at Wembley Stadium – it’s excruciating to watch but the scene is set as the Duke’s wife seeks out Lionel Logue in a bid to find a cure for her husband’s stammer. She finds him at his ‘Harley Street consulting room’ – an extraordinary, vaulted room with huge feature windows at one end, distressed, peeling wallpaper in mottled autumn colours and minimal furniture. 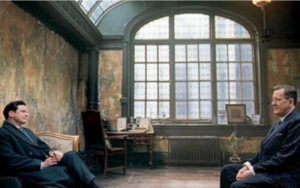 33 Portland Place is a six-storey, Georgian mansion in the heart of London, with a very colourful history. Built in 1775 by renowned architect, Robert Adam, it was part of a project to construct ‘the most impressive street of eighteenth century London’.

Over the years, the property has been owned by an impressive line up of influential people – typically Lords, Earls and Barons – who entertained visitors including royalty and heads of state; the roll call includes Winston Churchill and Queen Mary, the wife of King George V.

Between 1893 and 1925, it was owned by Baron James Blyth, millionaire founder of the famous gin distillers, W.A. Gilbey & Sons. Despite his reputation as a fun-loving ‘playboy’, Blyth invested huge amounts of time and money in the house. He built a Victorian extension (including a stained glass billiard room), and introduced a hydraulic wall, powered by a water pump system in the basement, which rises and falls to provide an optional room divide (then between the dining room and the music room). Blyth also installed the drainage system, which – like the hydraulic wall – is still in use today.

Between 1954 and 1998, the property was home to the Sierra Leone embassy. Throughout the late 1950s and 1960s, diplomats would use the apartments on the top floors when visiting London, but after this time the number of diplomatic staff reduced steadily and the apartments were left empty for over 30 years.

When Sierra Leone succumbed to financial crises which culminated in a coup and civil war, 33 Portland Place fell into a state of disrepair and eventually became derelict. At this time, the flamboyant British entrepreneur Edward Davenport was approached for finance to assist the running of the embassy. After much controversy around the deal (the purchase price was a mere £50,000!), Davenport became the new owner in 1999, with great plans to restore the building to its former glory.

Under Davenport’s ownership, 33 Portland Place became a magnet for those seeking glamour and excess, with lavish, hedonistic parties. It has also used for high-profile events, including exhibitions, films and photography shoots – credits include a Kate Moss advertisement, the video for Amy Winehouse’s Rehab and of course, Oscar winning film The King’s Speech.

But What About The Windows?

If you’ve watched the film, it’s likely Logue’s amazing consulting room made an impression – not least because of the huge feature windows at the far end of the room, and in the roof.

We didn’t spot any sash windows but that’s understandable – most of the action happens inside, giving the impression that the consulting room is in some sort of industrial warehouse building- not in a Georgian townhouse. But if you look at the building from outside, there is no disguising its Georgian architecture. 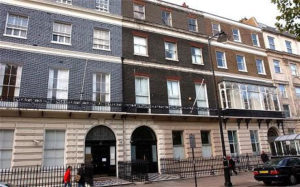 Many of the characteristics that we’d expect from a Georgian house can be seen when we look at the true exterior of 33 Portland Place. Typically, Georgian houses have sash windows which slide up and down on a series of weights and pulleys (originally, most would have had internal shutters too). The front door is also typical, set back from the brickwork with a semi-circular fanlight above and an arched surround.

In 2011, Davenport received a prison sentence for his part in a series of fraud schemes. He was released early due to ill health, and forced to sell 33 Portland Place in May 2015, as part of confiscation proceedings by the Serious Fraud Office.

So, what next for the house with so many stories to tell? Time will tell…