A Window Into Films: Bridget Jones

“I have two choices: to give up and accept permanent state of spinsterhood and eventual eating by Alsatians, or not. And this time I choose not.”

There speaks Bridget Jones, the hapless, thirty something singleton lurching from one romantic disaster to another in pursuit of love and her very own Mr Darcy. In the film, we see her holed up in her small-but-ever-so-interesting London flat, binge drinking with Chaka Khan and then slumped in pink pyjamas to the melancholic strains of All By Myself. 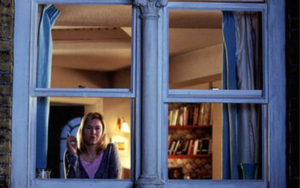 Bridget Jones was originally unleashed in a weekly newspaper column, written by Helen Fielding for The Independent. The column began in 1995 and quickly gathered momentum; novels followed and then came the film franchise that we know and love.

In the novels, Bridget lived in London’s Holland Park, but in the films she is relocated south of the river, to Borough – specifically to Borough Market. Borough Market lies at the heart of SE1, one of London’s most central locations. Architecturally, it boasts a real mix of properties – period houses; high end, river-front blocks and warehouses along the Thames and also old industrial site renovations.

Borough Market is one of the largest food markets in London, with an impressive history that dates back to 1276, if not earlier. The present market buildings were designed in 1851, with additions in the 1860s; an Art Deco style entrance was added on Southwark Street in 1932. Controversially, many listed buildings in the Borough Market area have been altered or demolished as part of the Thameslink Programme.

Bridget’s flat is above The Globe Tavern at 8 Bedale Street: 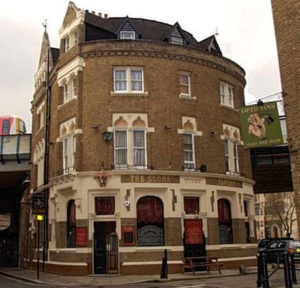 The Globe Tavern is a distinctive Gothic-style building, designed and built in 1872 by renowned Victorian architect, Henry Jarvis.

Jarvis spent much of his life in Southwark and then latterly, Dulwich. He designed many gothic-style, Victorian churches in the Southwark area; unfortunately most of these are now gone -destroyed by bombing during the Second World War, or subsequent demolition works.

The Globe Tavern has many features that we would expect of Victorian architecture, with arches, heraldic embellishments, ironwork and of course – those windows. With the arrival of plate glass in 1832, Victorian sash windows often had four-paned, vertical sliding sashes with a single glazing bar down the middle.

Sadly, the views are more limited these days. The tavern has survived recent demolitions in the area with true stoicism and is still a working public house. But these days, it is sandwiched between two railway lines and the views aren’t what they used to be.